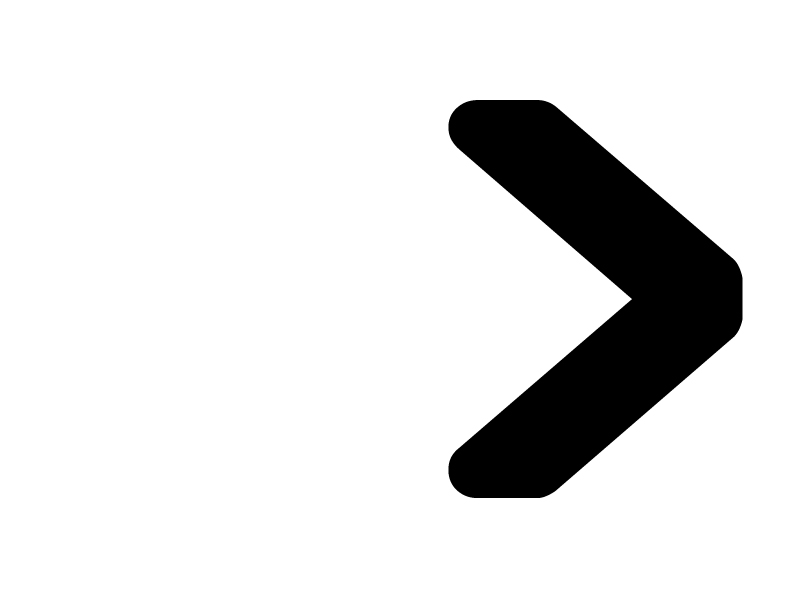 I have the impression that at present we designers act as the knotted points in a net, sought out by producers in order to find the answers to questions which they themselves cannot or do not want to answer. It is not the form alone that occupies us, but the context in which our ideas become products.
I have tried to serve as the moderator for students’ work at the HfG in such a way as to help them profit from the complexity a project gains as soon as a dialogue begins with a producer or publisher – this can serve as a chance to find the right answers during the design process, or sometimes even the questions to the answers. My aim is also to explain design not as a linear process, but as an acrobatic act in which as many balls are controlled simultaneously in the air as possible, so as to remove them from arbitrariness.

I therefore asked two very different companies during the last year to act as partners or even, one might say, as “projector screens”: The brand Thomas, a section of the Rosenthal Group, makes porcelain products for everyday use, in particular for dinner-table settings. A predominant share of the production is still manufactured and distributed in Germany. As it is the case with many manufacturers who produce themselves, Rosenthal has invested enormously in automation and stepped up production, in order to compensate for competitive disadvantages with, e.g. Asia.
Because many other European companies have followed this trend, it is becoming increasingly difficult to sell all of the articles so produced in this country.
The company Faserplast, located near St.Gallen, produces various items made of GFK (epoxy-glass resin). Their product line ranges from tanks used in agriculture to architectural elements, as were seen at the Swiss Expo 02 (among others, the Cloud in Yverdon-les-Bains). Recently Faserplast has begun working on its own furniture and lamp collection, which is distributed under the label “Nanoo”. The designer, Jörg Boner from Zurich, has taken on the position of Art Director.
Not all Nanoo products are necessarily made of GFK. However GFK is particularly suitable for the production of smaller furniture series, because it is possible to produce a small edition with simple implements and technical skills.

Now, after several months of work and with wonderful support from the model-building workshop at the HfG, as well as from Nanoo at Fasterplast and from Rosenthal, a whole range of customized objects have been achieved – each with some reference to one of the companies – that now open up new perspectives for both sides. 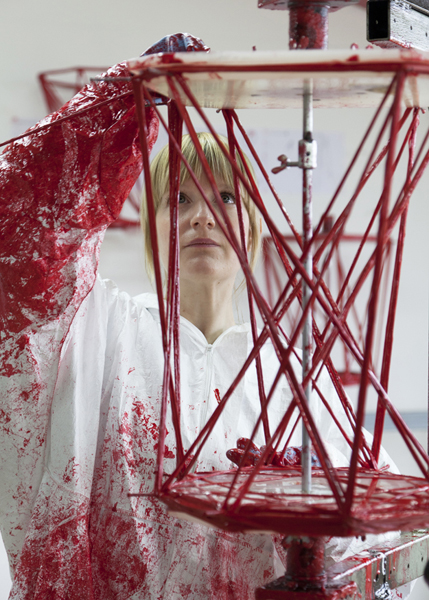 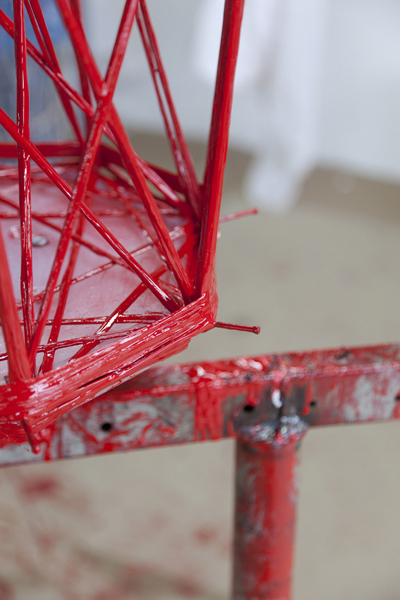 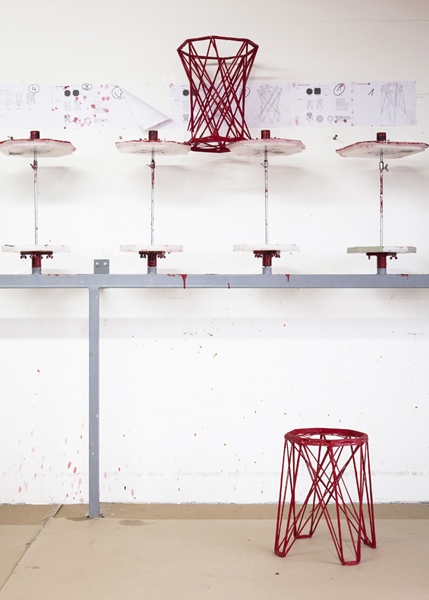 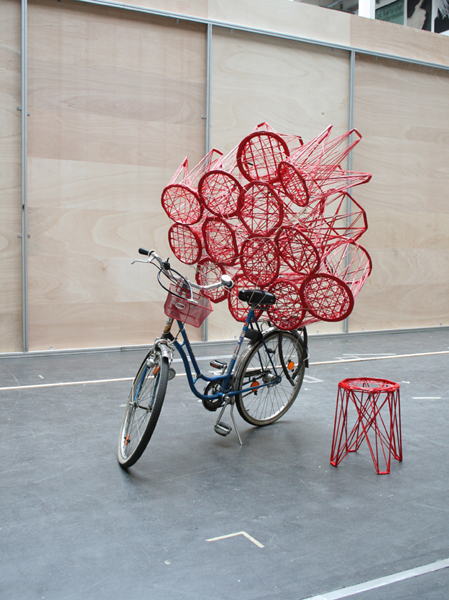 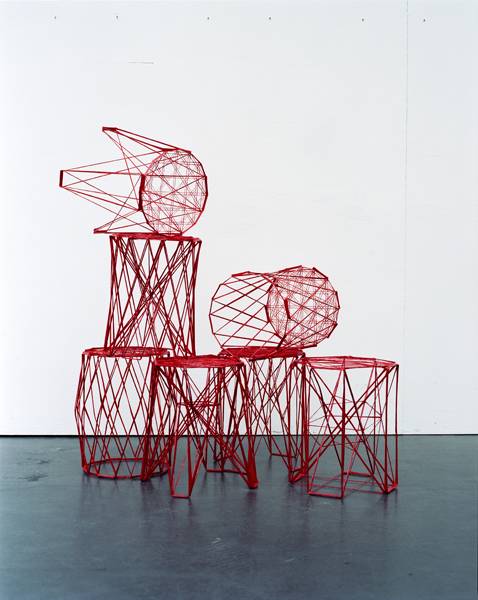 Looking from a distance, the glaring red “Nido” stools seem to be fragile, anyhow, while sitting on them, they turn out to be very robust. At the same time, however, weighing about 900 grams, they are nearly light as a feather. Form and function of the stools are interwoven so successfully, owing to their construction of fibreglass drenched in resin. Designer Eva Marguerre from Karlsruhe developed a production procedure, by which the fibres are connected and wrapped in different ways. So, starting with the basic model, individual stools evolve with different patterns and structures. The finished stools playfully contrast the flexibility of the original material and his hardening by the resin because the character of the fiberglass softness is still to be seen. Moreover, the resin makes the stools weatherproof and light resistant, and therefore also suitable for balcony and garden.
The Nido stools are handmade by the fibreglass manufactory Masson in Germany. 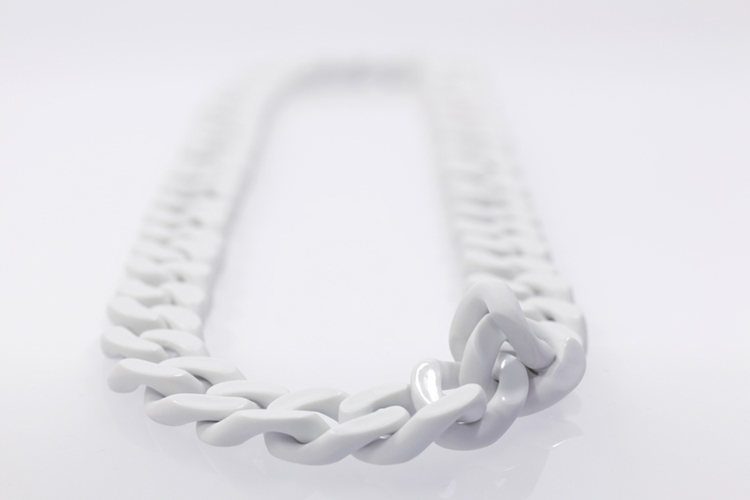 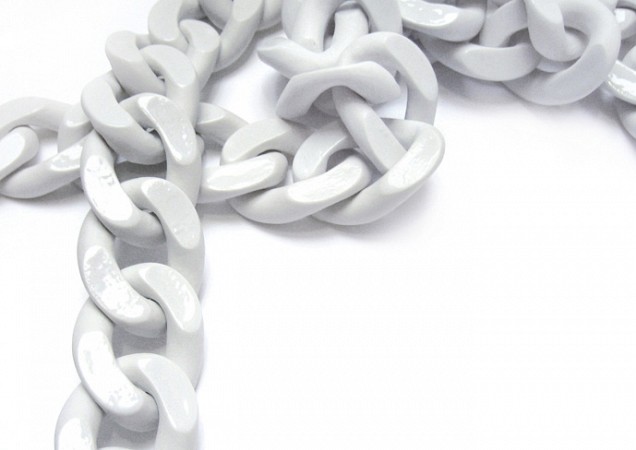 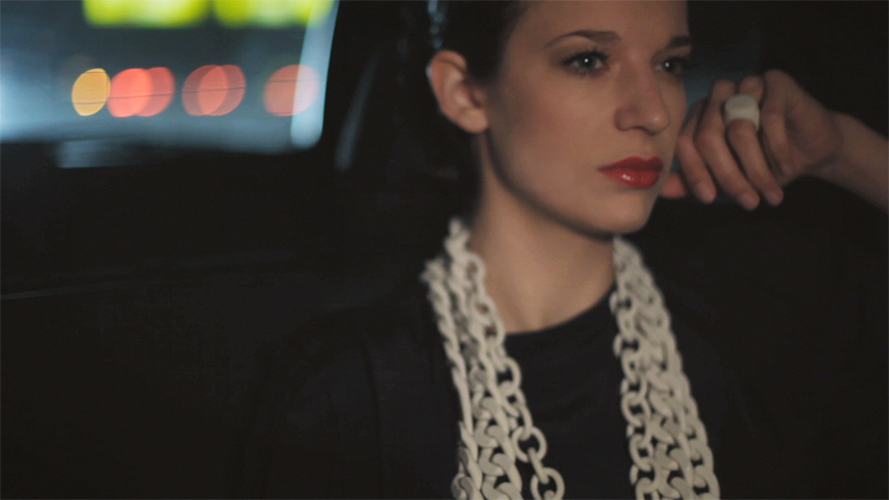 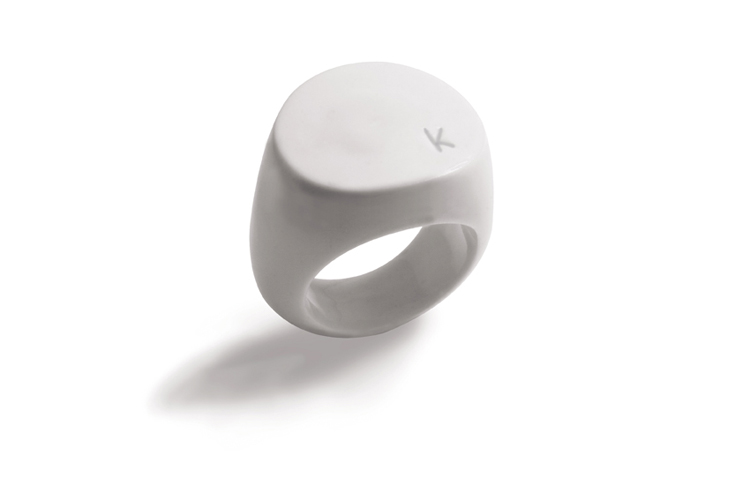 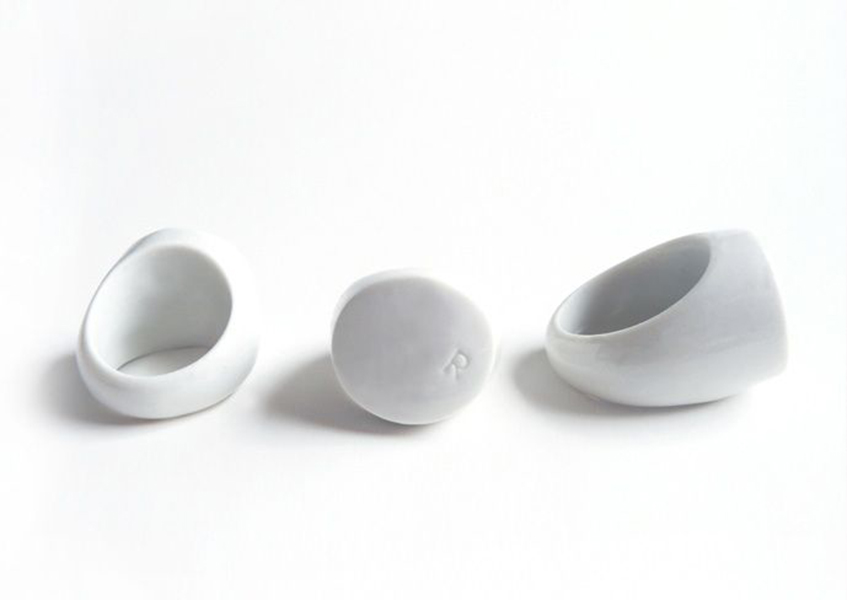 Concept
Apart from the regular aspects of jewelry design the collection made of “White Gold” also deals with the question of value. Typology, materiality and means of processing are radically re-thought and re-interpreted, with surprising results.

CURB CHAIN:
If the proportions are changed and the gold is replaced with partially glazed biscuit china, the curb chain changes its character, which is cliché-ridden and becomes a sophisticated fashion accessory.

ANCHOR CHAIN:
The transposition of known classic necklace designs into porcellain is a particular challenge. The links are separately cast, polished and combined into a necklace with intensive manual work.

RINGS:
The shape reminds one of a signet ring on purpose. The signet surface is the main focus of attention. This area is styled by designers and illustrators with different motifs and decors. 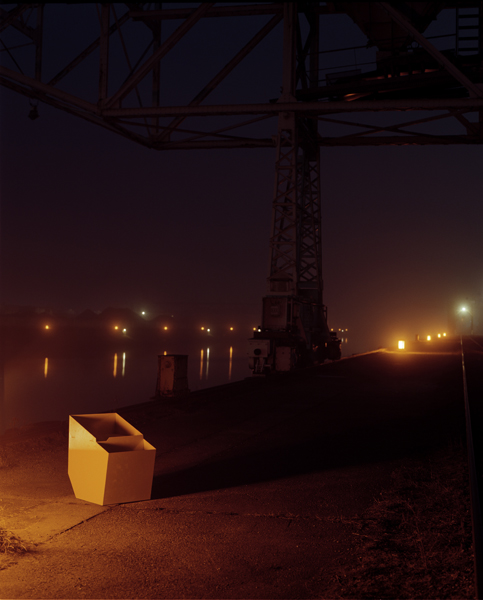 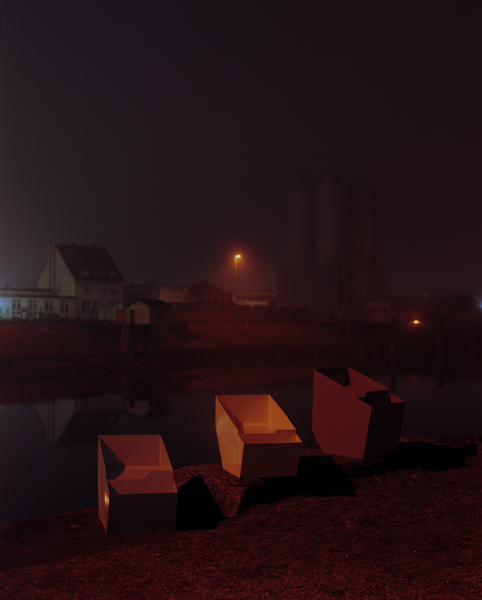 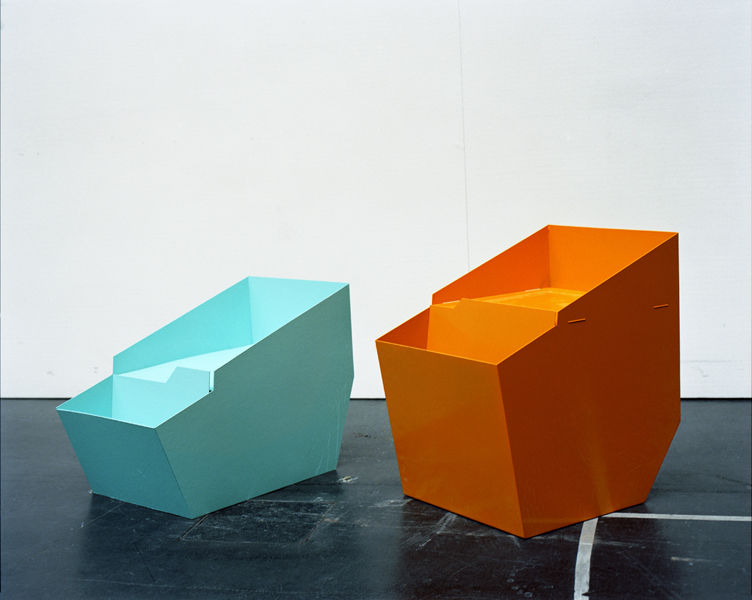 Small items can be placed on the storage area, books can be leaned alongside the rear panel; magazines and newspapers can be stored against the slanted section; by opening the flap one can reach inside of Oona. 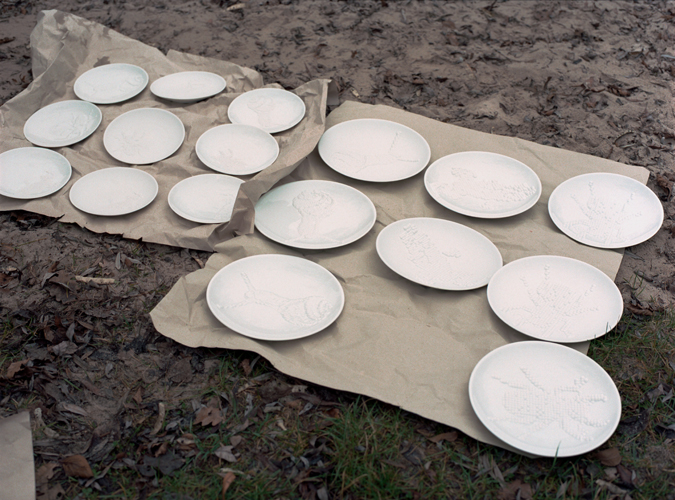 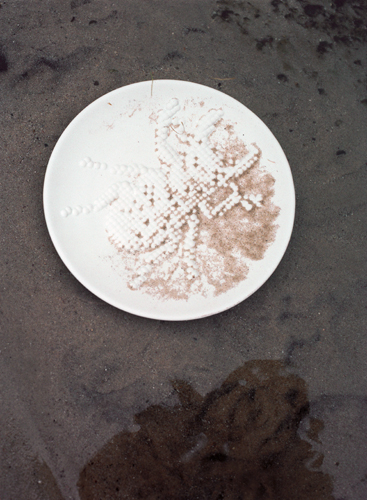 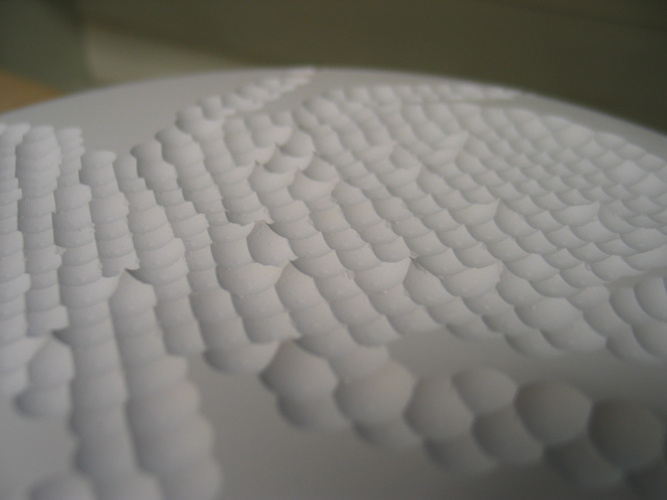 A digital process
Two-dimensional pictures are transferred into a three-dimensional texture using a computerprogram.
Various depths of boreholes compose structures that portray the picture in an abstract way.
Animal motifs have always been part of the standard repertoire of classic porcelain painting.
Therefore the motifs of the toad, the snail and the stag beetle were adopted to the series “Medaillon”
by Rosenthal. 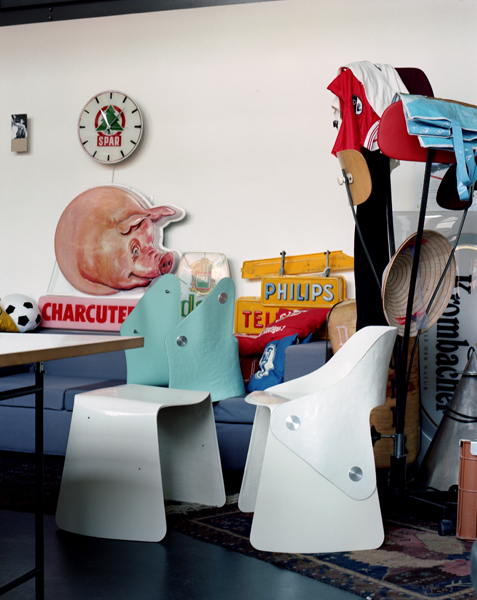 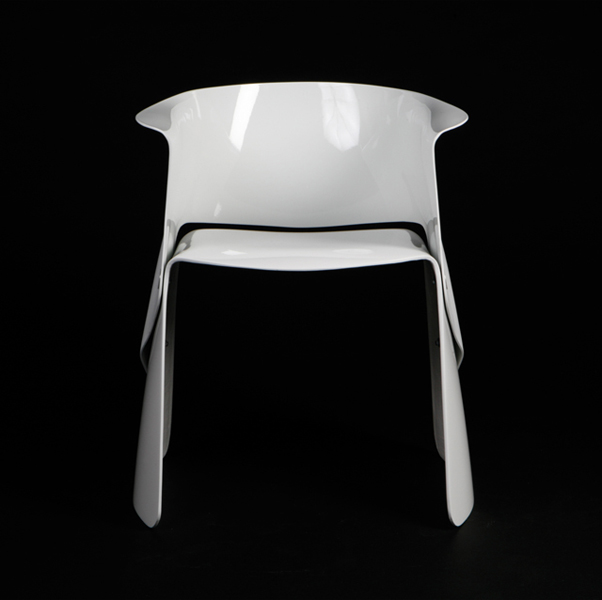 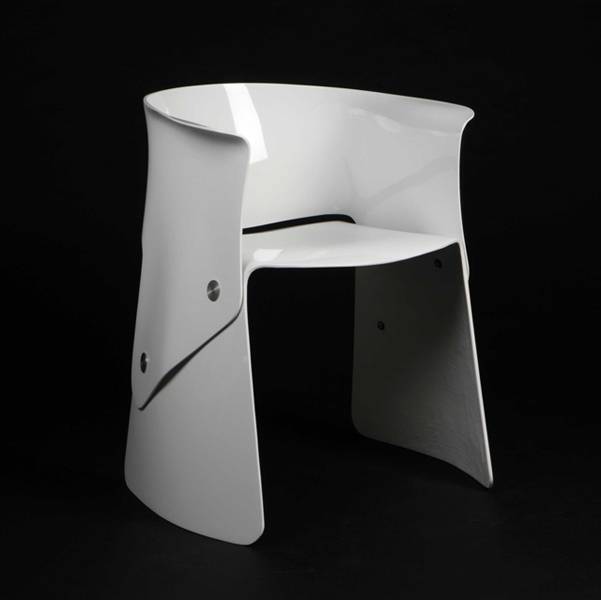 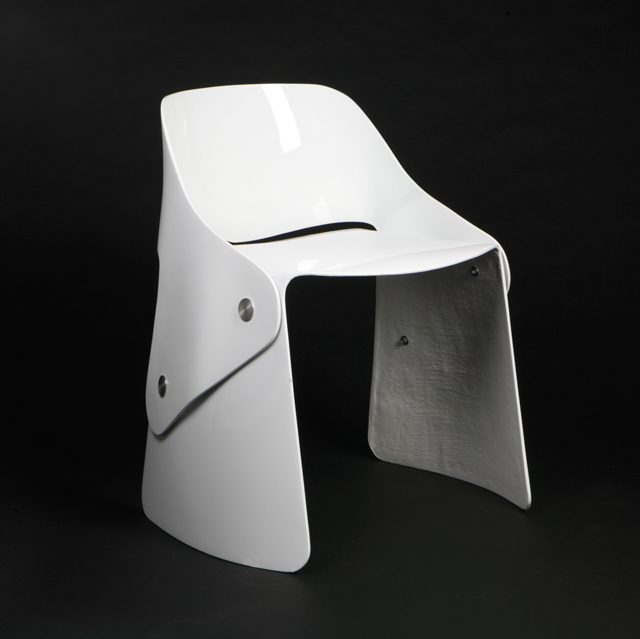 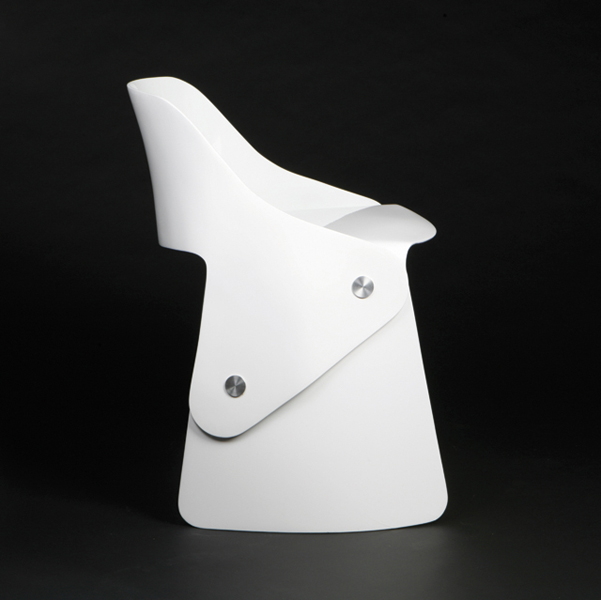 This chair is based on two modules which are connected to each other by 2 screws on each side.
The idea is to have a shape which is able to change, a little like going to the hairdresser – you look very diffrent by changing just the length of hair…. The base part is a stool, which also functions by itself and then there is the second part the backrest, by changing the shape of the backrest, the chair gets a whole new identity – and a different character. Wing Chair comes with two diffrent backrests, a low one and one with an armrest.